Quora Query: What Will it Take for the United States to Acquire Universal Healthcare?

There are two sets of answers to this query: Political and operational/organizational. Let me address each in its turn.

There is, to my analysis, nothing special about the United States and its people that make a rational National Health System (NHS) impossible. We are not peculiarly backward, nor are we a people without resources. We are not blind to both the promises and problems of an NHS. Indeed, we have at our disposal many bright and thoughtful individuals who think about this deeply and often.

So why are we in this position? A position in which families may be bankrupted by the cost of healthcare. In which individuals “ration” their insulin because it is so expensive – insulin, a drug discovered in the 1920s by the Canadian scientists Banting and Best, and whose patent was sold for $1 (one dollar) so that all would have access to the drug – and sometimes die because of inadequate control of their diabetes, because they cannot afford their insulin. In which we we spend more than any country on earth and have some of the worst quality outcomes. Why, indeed?

We are in this position I would argue, because we in the United States – through our “most brilliant” elites – have seen fit to consider the market as the arbiter of everything of value, even something as important as health care. Now my bias may start to show, so let me be clear: I am an American who believes in democratic socialism. I get completely that the way the market is worked by capitalists results in it doing some things pretty well. Healthcare – among others such as police and fire departments, ambulance services, the military, housing, and education to name but a few that are not well served by the market – is not one of them. We have allowed healthcare to become a “profit center” rather than treating it as we should: a service. Thus, institutions, corporations, and some individuals make serious money while our people go without health care.

Yes, there is charity care. There are laws such as EMTALA (Emergency Medical Treatment and Labor Act), enacted in 1986 mandating Emergency Departments to teat any emergency regardless of the person’s ability to pay. But these do not constitute a health system; they are band aids on a massive hemorrhage.

Our “elites”, some – not all – politicians and talking heads have everything they need, so they are not worried; if they had to put up with what most people do they would be rushing to solve this crisis. Our health establishment – organized medicine, hospitals – has, until recently, combated every attempt to formulate a rational NHS. It was only with the advent of the Affordable Care Act (ACA) – a wonderful FIRST STEP – that the American Medical Association and others became supportive. Yet with all of its improvements, the ACA (also known as “Obama Care”) is not the answer. It is expensive, unwieldy, overly complicated, and leaves the for-profit insurance sector in place.

And then there is us; the American people. Sad to say, many of us – at least until recently – have been too afraid of what change might look like. We may not like insurance companies, but we fear change, even though the change it is not really unknown. We worry about needing health care – including dental care – but somehow we have allowed ourselves to be bamboozeled into thinking that we are less if we have such a national health system. That, somehow, the “bootstraps” theory of life applies here. We fear being clumped into the mass of “them”, people who have needed society’s help at one time or another, as it could mean that we are “lesser” citizens. We have allowed ourselves to believe this drivel. It is false.

Modern and respected societies – Germany, the Netherlands, France, the UK, Sweden, Denmark, and Italy among others – have elements of capitalism and socialism mixed together to take advantage of each one’s beneficial characteristics. They all have NHS’ of one type or another: the Dutch and Germans make extensive use of (highly regulated) insurance companies, in the Scandinavian countries and the UK, there are lesser elements of the market in the NHS. France is a bit of a mix. None of these systems are perfect; they all have issues and problems, and so will we.

In the US, we presently spend about $3.8 trillion per year on healthcare. This works out to about $12,000 per person per year, more than any other country in the world. If we were in the top tier of health, health outcomes, and quality metrics, we might say that this is ok. We aren’t and it isn’t.

In a 2014 study published by the Commonwealth Fund, Davis and her colleagues noted that of 11 health systems in economically developed countries, the US system ranked dead last except in costs, where it was first. It was the UK NHS that ranked number one in that study. 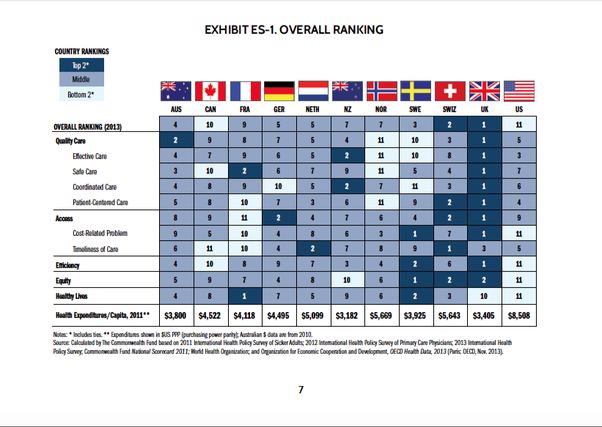 Given the amount of money (see above, note that Davis’ spending figures are from 2010) we spend per person in the US each year on health care, we could develop a robust system covering all costs, paid for with taxation.

Think of it this way: If we spend $3.8 trillion yearly – and increasing each year – we will have consumed over $40 trillion in 10 years. One of the idiotic critiques of Medicare for All – there are some good critiques but this is not one of them – as put forth by Senators Sanders and Warren, is that it will cost $36 trillion (over 10 years). It is as if the critics can’t do basic math (and these are our elites?). Or they are trying to be cute, or something. I can’t figure it out.

IF WE DO NOTHING: We will spend about $40 trillion over the next decade. For that $40 trillion, we will get relatively poor health outcomes, no- to inadequate-focus on prevention, multiple hundreds of thousands of our people declaring bankruptcy because of health related issues (the costs of care and inability to work because they are sick), among other things. Oh yes, and some 23 million of us will be without access to health care, while the “insurance” products carried by another 30 million or so of us will be essentially worthless. About 53 million of us will be uninsured or under-insured. Under-insured meaning that the “insurance” pays for $2,000 or $5,000 of your hospitalization but nothing more. I will point out that this amount of money will not get you out of the Emergency Department, never mind the hospital.

IF WE DO SOMETHING: And that something is Medicare for All (M4A), we will spend about $35 to $40 trillion over a decade. All of us will be covered and the coverage will include prevention, hospitalization, drugs, nursing home care, and so forth. The premiums and out of pocket payment you now must deal with will be gone. Everything is covered by wealth taxes of several varieties on the uber-rich (yes, I do believe that every billionaire is a failure of our society), and the income tax we all pay.

Will there be problems? Of course there will be. To live is to have, and to solve, problems. This is part of the meaning of life!

We will have to decide what is covered and what isn’t; these decisions will be evidence (research and data) based. Where there are no data, the research will have to be funded and performed. Pharmaceutical and equipment companies will have to negotiate prices with a NHS body/subcommittee. Nurses, physicians, pharmacists, physical therapists, social workers, among others will be on boards in every state and coordinate the costs and care with national bodies. We will have to get control of costs, including salary costs of highly paid specialists.

Women’s health and mental health will no longer be left to the whims of an employer-based health plan that can change at any moment. We will have to begin a long and painful discussion on death and dying, on how we want to die and where. We can no longer pretend that it doesn’t happen.

We will have to have a national discussion on issues that divide us, such as birth control, abortion, immunization, and others. We can no longer leave these discussions unspoken.

And there is more.

Implementation of a NHS will not be – as Churchill once said – the end, or even the beginning of the end; it will, however, be the end of the beginning. It will mark a point in time when we decided that our people were at least as important as tax cuts to the rich, and weaponry.

In conjunction with the Green New Deal, we might even have a world left to live in and enjoy, in health!

Every NHS has problems: finance, the roles of different practitioners, equipment, research, teaching, where to build hospitals versus clinics. How to incentivize health care workers without encouraging behaviors that are detrimental to the health of the country. How to adjudicate which therapies will be provided and which will not be. The debates related to levels of evidence when discussing treatments will be – to say the least – vibrant. We will still have difficulties when we have a rational NHS, but they will be different problems than the ones we now have. And to my way of thinking, better ones.

Essentially none of us in medicine, nursing, pharmacy, physical therapy social work, and other medical fields, went into this work to become rich. Rather, the majority of us did so, in the main, to serve our people. We will not be poor, even if the towering heights of salary levels come down a bit. All of us, including those of us in health care, work to provide for our families and ourselves. We also do so because of the honor related to our work; that will not change with a NHS.